a story about magnets


Ok, like I said, once upon a time, in the mid 1980s (what? you weren't even born then? sigh) shortly before we were married, my husband bought a sporty, bright blue, Z24 Cavalier. It was a fun little car, way ahead of it's time, with a fully computerized dashboard! Now really, not many things were computerized in the mid 1980s. Seriously. I know you youngsters are having a hard time imagining that but it's true.


So, on with the story. A couple of years after he got the car, strange things started happening. The dash would go out at random times. Now when the dash went out, you lost all your crucial information. For example, you had no idea how fast you were going (which would have been a big problem for me, the speedster, but did not seem to be a problem for him. hmmm). You didn't know how much gas was in the tank. Little stuff like that. He took the car into the repair shop several times, but alas they could not seem to figure out the problem. (I know what you're thinking, ummm Ellyn? I thought this was a crafty blog? Why are we discussing cars? Stick with me...)


Well eventually it got really bad & we decided to trade the car in. By some miracle, the dash actually worked when the dealer took it for a testdrive & we got a decent trade on it. When hubby cleaned out the glove box, there was a huge bundle of magnets in there (for a reason unknown to me.) Hmmmm magnets... computer..... problems..... do you think? Ever since then he has been stressing to me & the kids how important it is to keep magnets away from all our computers. 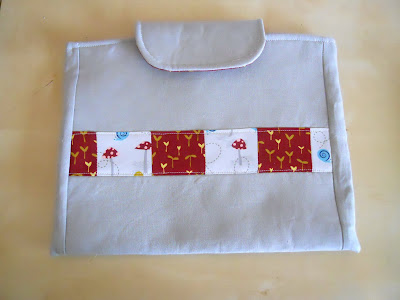 I've had these two fabrics for ages & didn't know what to do with them. Don't they look great with the linen? I really like the look. Here's the inside of the flap... 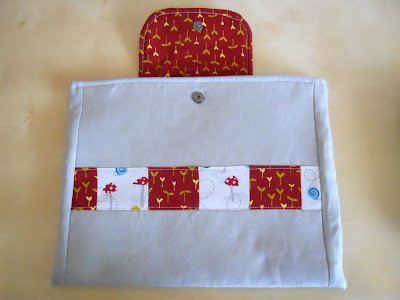 Oh geez. Do you see what I did? I PUT MAGNETIC SNAPS ON BOTH OF OUR LAPTOP CASES!!!!!! Brilliant. Hubby took one look at it & said, "ummm honey? Is that snap magnetic?" Why yes dear. It sure is. So yesterday I took the snaps out of both of them & replaced them with velcro... 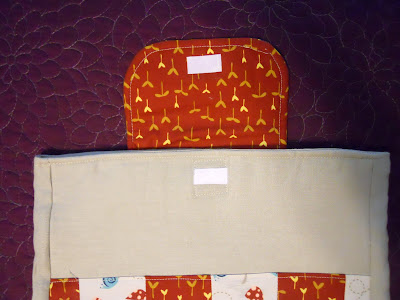 On Leigh Anne's I was able to neatly undo the lining remove the snaps. On mine, not so much. So I kind of cut some holes, then patched it back up. It all ended up looking just fine except for the extra stitching on the outside of the flap. So I found a big button & sewed it on for decoration... 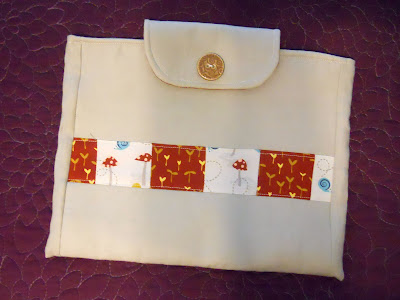 And no, it doesn't have a magnet on it. Lesson learned.
Posted by Ellyn at 9:00 AM 2 comments:

Have you seen the stuffed doll pattern from Modkid Designs? Patty Young calls them "potty dolls" ummm... ok. I think I would give them another name! Anyways, Ally & I saw them at the market review at our local quilt shop last month & had to have them..... 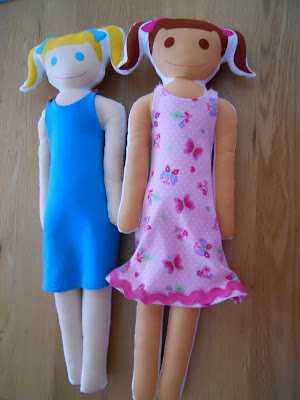 Each panel has three dolls on it. We bought 2 panels, so six dolls, & have finished 2. Aren't they adorable? Look at this sweet face..... 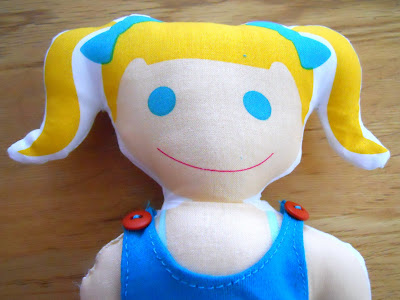 And she has a free pattern on her website for the little knit dresses. We added buttons to the one and rick rack to the other. Ally loved the way the rick rack gave the bottom of the dress a flirty little shape. Easy squeezy! The hardest part of the whole thing was getting the stuffing into those skinny little limbs!


Ally is off to introduce the dolls to her favorite little neighbor girls who I am sure will give them a good home! She has already asked me to make them some more dresses.... guess we'll have to head back to the fabric store sometime soon as I don't have a stash of cotton knits. Bummer huh? You know how much I hate to go there! 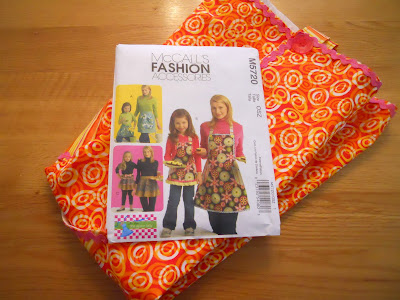 Leigh Anne requested an apron for her new apartment, so she & I went to Hancock fabric yesterday & chose a pattern (McCalls 5720), fabric and trims. I have to be honest, I have not sewn with "commercial" patterns in a while. By commercial, I mean the big companies, McCalls, Simplicity, etc. I've been designing a lot of my own creations in recent days. When I do use a pattern (for most garments honestly) I lean toward trying some of the designer patterns on the market....
What I have discovered is that the designers (Amy Butler, Anna Maria Horner, two of my favorites) are much more fussy about neat & tidy finishes, details, etc. Of course the pattern price reflects their hard work! But I think the extra cost is worth it.
Here are the positives about the McCalls pattern I purchased for this apron: 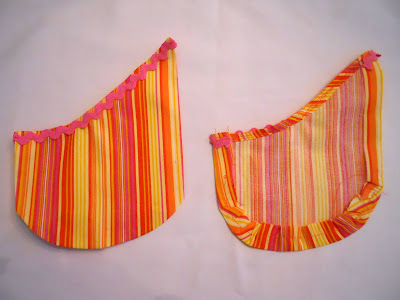 Sometime during the night as I lay staring into the darkness I decided to start over this morning. I found some white cotton to use as lining. First I lined the pockets: 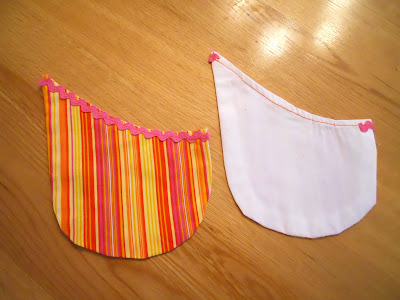 much better. I also decided to line the entire apron, encasing all of the messy edges & giving substantial weight to the apron. I was so much happier with the end result! I think it will wash much better and last a lot longer this way, so important with an apron that will, hopefully, need to be washed often! 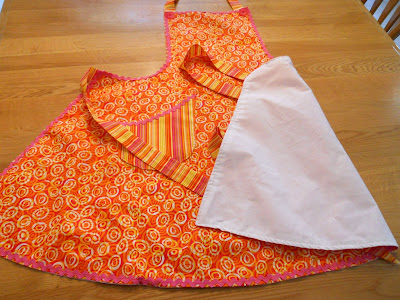 So here are my tips if you should decide to make this pattern:

1) buy an extra yard of lining fabric & cut from it, 2 pockets, an apron front & 2 apron sides
2) we found the piece around the neck to be much too long. I ended up shortening it by 3 inches... you will want to measure that in advance!
3) the ties are also extremely long. I left them as is, but even tied in a bow they hang very low.
4) the rick rack & buttons are purely decorative. They look cute but are totally unnecessary. If I make this again, I will be creative with my decorations.
Despite my frustrations with the pattern, I am very happy with the end result & Leigh Anne is too! I can't wait to hear what she cooks up in it! 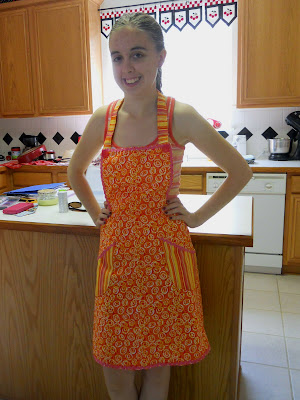 because a girl can never have too many bags... 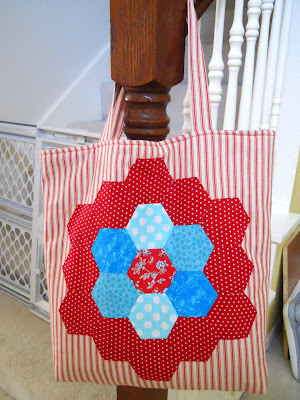 or maybe just because I pieced these hexis so long ago & I was tired of waiting for them to make themselves into something? Either way, I am really happy with the way they look appliqued onto red pillow ticking. It's a nice sized bag to take a magazine, a hand project & my little clutch bag when I know I'm going to be doing some waiting somewhere. And it just plain makes me smile.
Today I am working on an apron for my daughter. NO not for Ally! Leigh Anne has been learning to cook this summer, preparing to move into her first apartment in a couple of weeks. And she asked me to make her an apron! I will happily share pictures in the next couple of days. I will say, I have not sewn with a "commercial" pattern in a while & I am disappointed in this one. Maybe I will do a pattern review for you too.... seems like people only do those when the patterns are fabulous. Hmmm....
I just wanted you to know that my sewing machine is not sitting idle!
Posted by Ellyn at 7:04 PM 1 comment:

Yup, Ally is back at work! Today she made a party cake for her physical therapy friends. 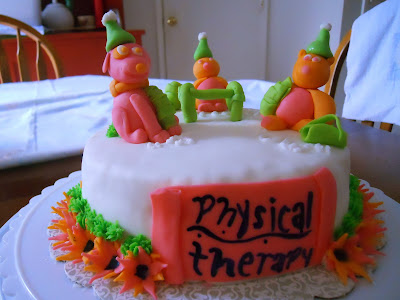 I just love the injured animals in party hats she made out of fondant. 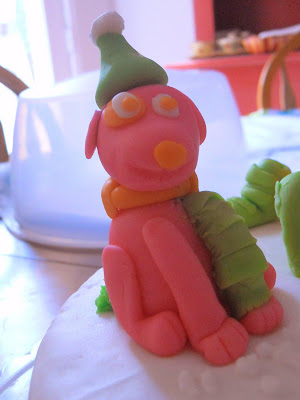 Check out the penguin's walker! 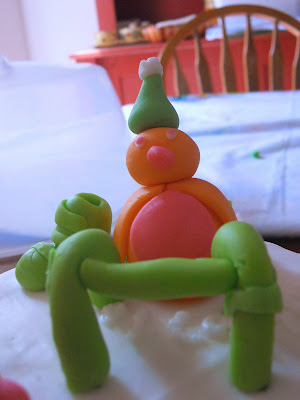 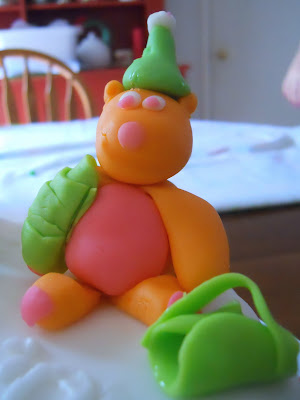 And the beautiful flowers she created for the base of the cake.... 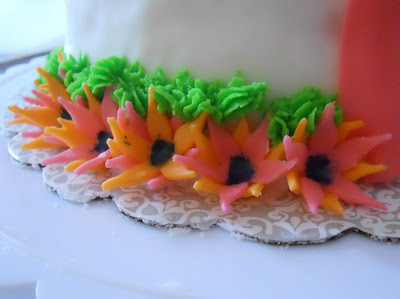 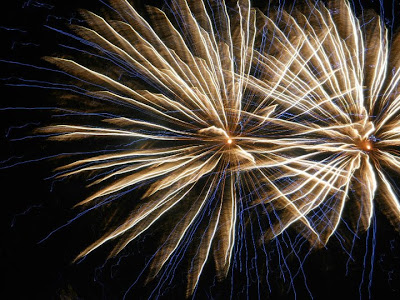 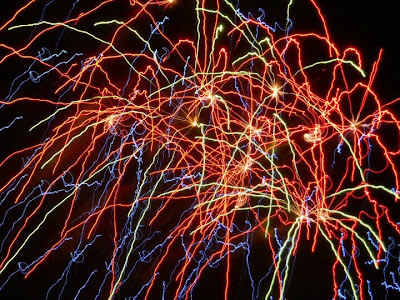 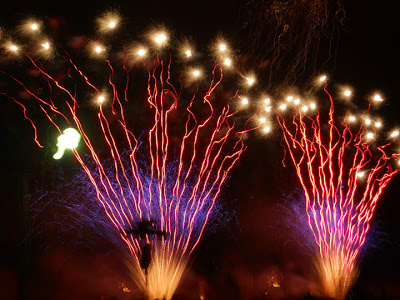 Yes, I am aware it's not dark out yet. The All American City of Allen TX celebrates the fourth a week early! Don't ask me why. Couldn't tell ya. But the fireworks were awesome!
Posted by Ellyn at 7:57 PM 1 comment:

Allyson has had it in her head for a while now that the dog needed a house. Hubby has been scouring the internet for free plans.... came up with nothing. So today, he, Steve & Ally headed to Lowes for ideas. I seriously had visions of this turning into a summer long project. But no! They came home with a kit to put together & the three of them set to work right away. 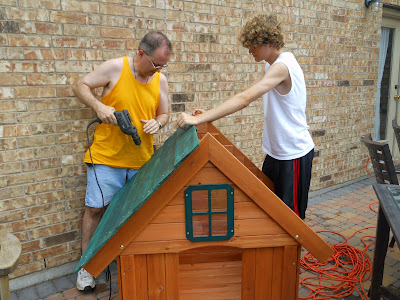 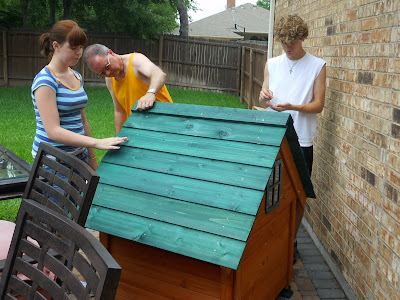 In no time at all, Lexi had a new house. They put a treat inside to try to lure her inside..... 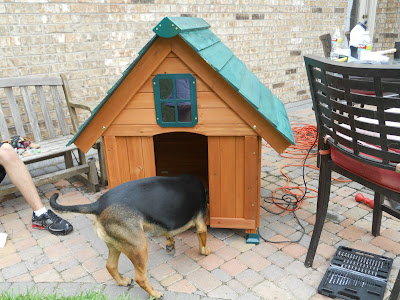 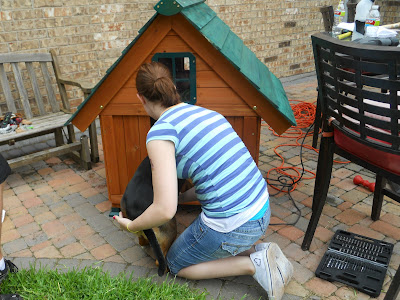 Maybe a little push will help? 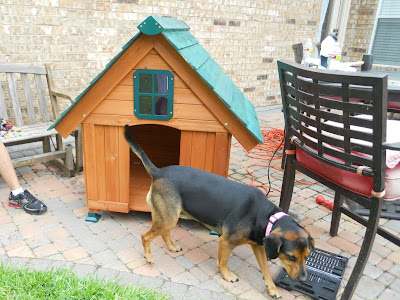 nah. Nice house guys but I'm going for a walk.
I'm sure she'll get in it eventually!

a case for a MacBook

Lucky Leigh Anne got to spend 3 1/2 weeks in Europe the beginning of the summer! She was studying journalism over there (and having some fun along the way!) Unfortunately, someone broke into the girls flat in London & stole all of their computers. Not the highlight of her trip, I assure you.


So..... Leigh Anne got to order a new laptop for school. She decided to make the switch to a Mac. The MacBook was ordered on Wednesday (along with a FREE Ipod touch! Lucky girl) and it arrived yesterday! WOW! She has been having a blast figuring it out & asked me to make her a new laptop sleeve for it. Of course I said yes! Here's the finished case.... patchwork in the colors she requested. I stitch & flipped it on a piece of fusible batting so it quilted as I went along. Two snaps on the flap & a bright pink lining, as requested.... 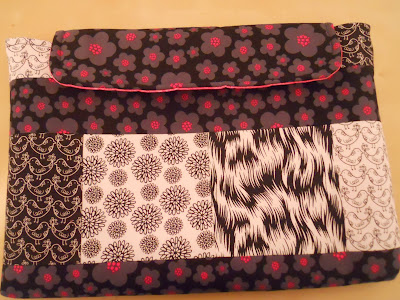 It was fun to make (I think my laptop needs a new case too, don't you? Hmmm that may be tomorrow's project!) and quick! I bought the fabric this morning and tonight her MacBook has a new home.... 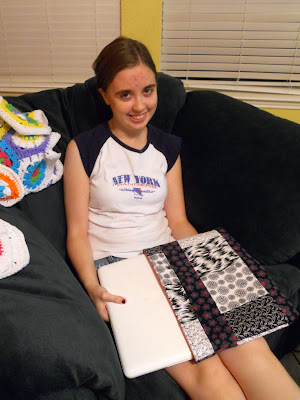 I love making my kids happy!