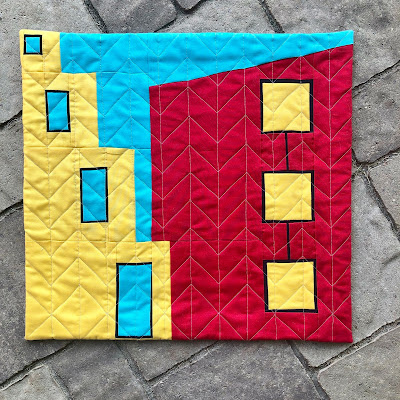 Quilt #3 in my Through Ellyn's Eyes series came together in the same fast and furious method as quilt #2! Once an idea pops into my head, it just cries out to be made. I began piecing this one on Saturday and put the final stitches in the faced binding this afternoon. whew!

Though remotely inspired by photos of buildings I have perused on Pinterest, it doesn't really resemble any of them. I knew I wanted to do the windows with tiny borders, a technique I have played with several times in the past. I drew a simple sketch in my sketchbook and just began piecing.

As I am often inspired by buildings and architecture, I suspect there will be more building quilts in this series. This one is pieced in Kona Capri, Corn Yellow, Red and Black. To me it looks like a city straight out of a comic book. In fact, a friend commented on Instagram that she could visualize a superhero flying out of one of the windows! I get that.... and I will say, I don't hate the idea!

The finished quilt measures 17" x 18" and I quilted it on my domestic machine once again drawing my inspiration from Jacquie Gering's book, WALK 2. This one is called Sashiko Chevron. If you look closely, you'll notice that I flipped the bottom zig zag upside down, creating a diamond. It was totally accidental and I reached for my seam ripper then decided I rather liked it! So, design element it is.

I used a faced binding, as I find this less daunting than matched binding and I like the nice clean edge it leaves. No hand stitching on this one, I considered it but it just didn't seem to fit anywhere.

So, three quilts done. If I keep going at this pace I'm going to have a lot of minis in this series! 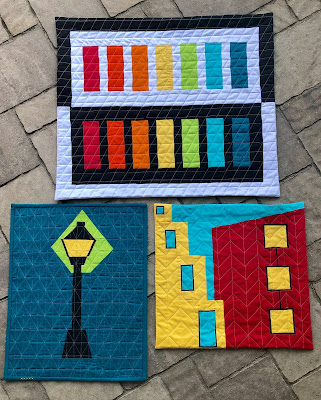 Love your City Windows, and am so happy how your personal project is inspiring you! Wonderful quilting and your 'mistake' is a perfect added detail. ;-)

City Windows fits in well with your others…

City Windows would be my favorite. What a fun project :)