London craftiness and getting ready for the Olympics

You already know that there was no way I could travel to London for 10 days and not do any crafting! I considered taking my fusion blanket, but the skein of yarn I am using is much too big and bulky to carry along. The gals at the quilt store were all going on and on about "twilling" a new (to them) embroidery stitch they had discovered. So I found a tutorial, did a few practice stitches, and drew up a London souvenir that I could work on while I was gone. 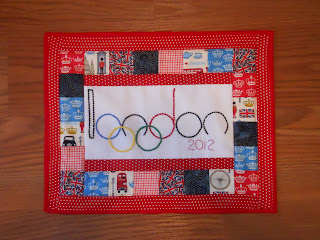 When I got home, I added the patchwork borders using some leftover scraps of my London fabric, layered and quilted it, and now I have myself a very personalized London souvenir!

Is anyone else getting excited for the Olympics? It was fun to watch the city getting ready. When we first arrived, there was lots going on, scaffolding in the squares where they were erecting big screens and temporary bleachers, plants and grass being ripped out and replaced so it would all be beautiful for the tv cameras. We saw lots of fenced off areas where the venues are, not yet open to the public. 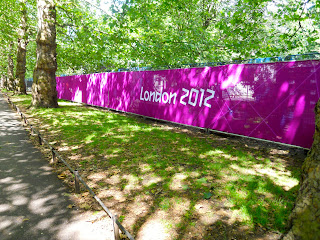 If you look at the photo below, between the tree and the building, you can see the "football" (soccer) stadium. This was as close as we could get. 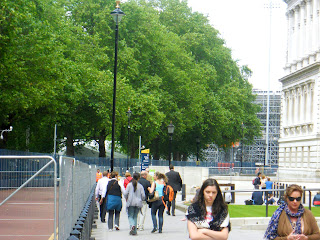 By the time we left London, there were banners hanging in the streets, flags from all the countries, Olympic banners, all of the gardens were neat & tidy like this one: 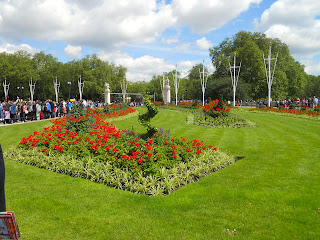 It's so much fun to see the broadcasters on TV at all the places we just were!

Very cute souvenir! It sounds like a wonderful trip. I love England too!

I'd be jealous of your lovely adventure if I hadn't been on vacation myself. Sounds like a wonderful trip.

During the 2008 Olympics, Bella was only 1 year old, so this is the first proper games for the kids to see and Bella has been learning about them at school so it will be great to sit and watch them with them for the first time... although the time difference might limit what we watch!

What a lovely personal souvenir you stiched while away. Great photos too.

That is a fantastic souvenir!

I always enjoy seeing places we've visited on TV or in movies - it brings back the memories of our times there. I'm looking forward to the Olympics . . . so I'm hurrying today to process the 180+ emails in my inbox & a huge mound of laundry!

VERY cute embroidery and how cool to be there for the Olympic set up. I will admit... I do NOT watch the Olympics. I find them boring. Don't shoot me! :)

My gosh, this is AMAZING. what a wonderful keepsake to remember your trip AND the Olympics!