A while back I won some patterns from Sew Sweetness. I knew I really wanted to make the Aeroplane Bag and was just waiting for the right fabric to come along. When I saw Road 15 by Sweetwater I fell in love with it. Then I decided it was perfect for this bag! 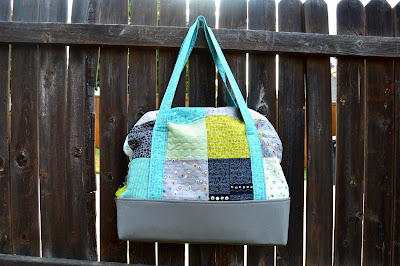 I just love this finished bag but I have to tell you, it's probably the trickiest thing I've ever made! Sara's directions are perfect though, great photos, and once I made myself slow down and take it step by step I did just fine. 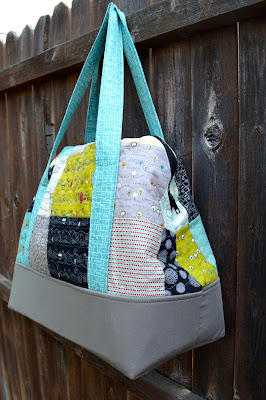 The pattern does not call for patchwork. I used a charm pack and just "made my own fabric" out of the charm squares then proceeded as the directions said. I also didn't have any soft and stable called for in the pattern. I've been wanting to try it and keep meaning to order some. But when the inspiration hit me to make the bag, I didn't have time to mess around with ordering it. I used a layer of fusible batting instead, probably floppier than the soft and stable would have been but I'm happy with it.

Oh, another change, I added one layer of batting inside my straps as well. Just because that's the way I like my straps! Personal preference.

The inside of the bag has two zipper pockets, really big ones! Confession time: I only did one. I had a hard time getting the zipper sewn in without a bunch of puckers in the lining fabric, probably if I had slowed down a bit it would have been fine. But, like I said, when inspiration hits me there's no slowing down. I was in GO mode so one pocket it is. 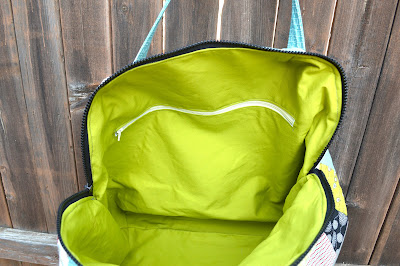 This bag is seriously large! I can't wait to fill it up with goodies and go off somewhere. I have several fun weekend jaunts planned this fall (more about those later!) so I'm sure you'll be seeing more of my Aeroplane Bag!

OOoooooooo!!! LOVE!!! I think I need to look into that pattern. Road 15 is the PERFECT fabric for it!! It's on my list to purchase. I saw on FB a while back... someone posted a shot of the yardage with all the addresses on it... my street address is on it!

It turned out wonderfully! So pretty! And making your own fabric was awesome. After 4 weekenders, I think taking it slow is the only way to accomplish it - that and a big needle to handle the thickness of the fabrics. Well done!

I've been wanting to make this bag, too. Your bag turned out great! The soft and stable is really nice because it adds so much structure, but it's still really lightweight. I just had to order another yard of it.

Anyway, your bag looks awesome and reminds me that I want to make this bag, too!

Love this! Another thing I am working on...sewing...I have a friend that does that part of any crafty thing that I do...but this is really nice and I agree, the size is perfect. I'll have to try and do this :)

Looks wonderful, bright and ready to go! It's gotta be big -- you really want to make the most of the usable space as cargo space is at such a premium these days! :)