Many years ago, before I realized I was a modern quilter (and yes, it was in me all along! as soon as I discovered modern quilting I knew I had found myself) I was active in a traditional quilt guild in our community. I learned so much from the ladies there and I'm thankful for the start they gave me in quilting.

At one time we held a strip swap. We each brought 2 1/2 inch strips of Christmas fabrics and someone mixed them all together and gave us each back an assortment of strips. We were challenged to make a quilt from them. I have to be honest, I was not terribly inspired by the fabrics I received! They were of assorted quality (that's code for "some of them may have come from Walmart") and the prints themselves were anything but modern. Some of the ladies made amazing quilts from the strips! I, on the other hand, did not. After staring at them for quite a while (months?) I finally just did a jelly roll race topper. 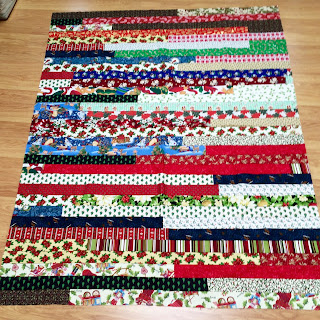 I hated it. I folded it up and shoved it on a shelf. Every now and then when I would straighten my stash, I would pull it out, look at it, fold it up & put it back. Occasionally I would think "I should do something with that topper" (something other than throw it in the trash that is). But I never did. Two years ago, we moved to a new house. I did a lot of purging at that time, got rid of fabrics I no longer liked (GASP!), donated much of what I had collected. For some odd reason, I tucked that ugly quilt top in a box and moved it to the new house.

Last October, we were challenged at our Modern Quilt Guild meeting to dig out three of our works in progress and pledge to get them finished by our February meeting (truth be told, I was the one who issued the challenge). I don't know what got into me, but I pledged to finish up that ugly Christmas strip quilt.

After much debate (mostly in my own head) I decided to appliqué some big, solid, modern trees over the top. And guess what? I actually like it now! 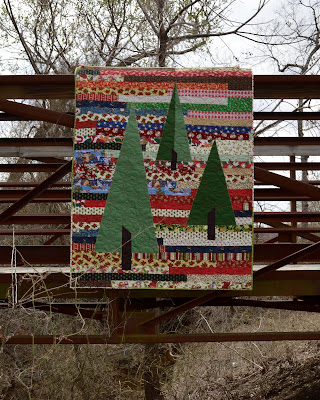 It was quilted by my friend Diann. I did NOT get it finished in time for our February meeting. BUT..... it is on my first quarter finish along list and it's done! Thanks to my trusty assistant  handsome hubby for trucking out on a photo shoot today! 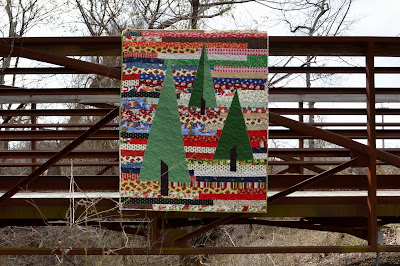 You made lemons from lemondade! That is a fantastic transformation!!!

I love it Ellyn and it was just waiting patiently for you to come up with the tree idea. So festive and fun. I am temped to make one. I have enough Christmas fabric to make a few of them. The trees are just perfect. Oh and congratulations on the finish. So awesome. I will have a finish this week that I am excited about.

Now, that was clever. I made a jelly roll race quilt a few years ago and was going to applique an iris on top of it. Still haven't done it LOL.

Wow, that really made the quilt come alive! Well done!

oh yeah! You saved this one, my friend. haha. I'll post it on the FAL fb page tonight!

What a difference the applique trees make! You made it something really great.