Confession time. I'm not much of a cook. No, really. I'm pretty terrible at it. I try. I collect cookbooks,  I collect aprons, haha! But I really don't enjoy it much and I rarely put much effort into cooking.

The other night we were at a restaurant (and yes, we eat out way too much, don't judge me). Hubby and Ally ordered a big sampler platter of bruschetta, several different kinds, all of them loaded with gluten which I can't eat. And no, I'm not bitter. They eat gluten in front of me all the time and I'm fine with it. But this bruschetta? man did it look GOOD! We analyzed it and memorized the ingredients and I decided to recreate 2 of the varieties today on gluten free baguette.

I spent the entire afternoon in the kitchen! I roasted these beautiful red peppers using this recipe. 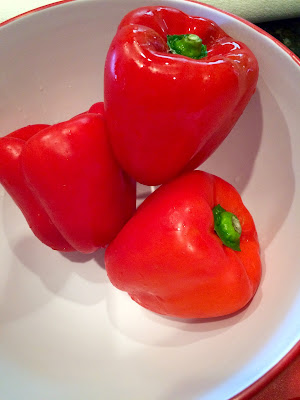 And then I made my first ever tomato jam using this recipe. Sort of. Actually I combined several recipes, which seems to be a risky move for someone like me who professes to be less than adequate in the kitchen. But it worked out. 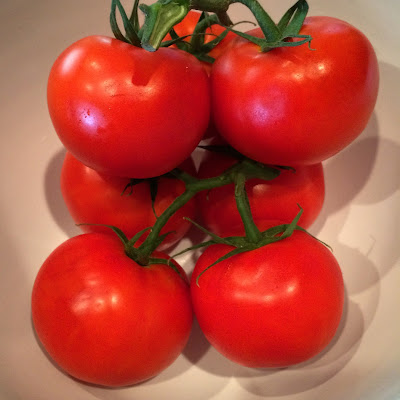 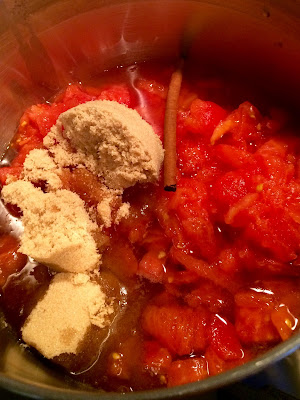 And the bruschetta? It was fabulous! I used an Udi's baguette.... 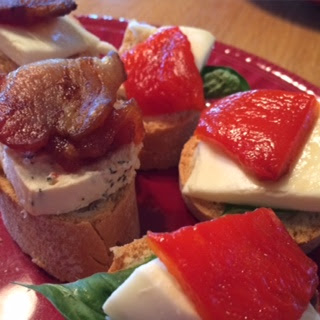 On the left, herbed goat cheese, a dollop of tomato jam and a piece of applewood bacon. And on the right, fresh basil, fresh mozzarella cheese and roasted red pepper. Not bad for someone who is basically allergic to the kitchen, huh?
Posted by Ellyn at 8:08 PM

Fancy! I don't care for peppers, but I'll take the bacon! How is the goat cheese? (I live a sheltered life).
Deb

yummers!! I may just have to try that tomato jam! I was in a pepper-roasting habit for a while when the kids were still at home. They'd walk into the door after school, "oh no, you're doing it again!" ;-) hmm. I need to make them again, it's been a while!

Looks delicious! Tomato jam is a favorite of mine - I should try and make some.

It looks yummy! We don't usually make a jam, just use slices of tomato.

Mmmmm. It all looks delicious!