Next Monday is our next swap at The Quilt Asylum. It's a potholder swap. So I thought I'd better whip up a potholder. I had several blocks left over from our Kaffe swap, and they are so pretty I can't let them go to waste. So I took one of my Kaffe blocks and some extra Kaffe scraps and made a double disappearing nine patch block. Quilted it with some insulbright and.... 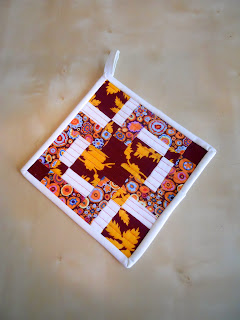 Hmmm. It's a potholder but it's kind of boring I think. Useful but not very swap worthy. Especially when I started seeing some that others had made posted on Facebook. Boo. So I started again.

I used some of the Halloween scraps I had left from my lil twister quilt and this tutorial and I like this much better. Here's the front... 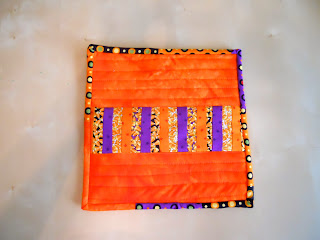 and a cool pocket on the back for your hand..... 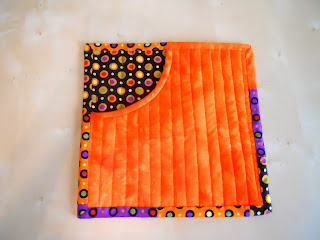 Actually I like them both. Depends on the receiver. You can't go wrong whichever you swap.

What a great useful swap...
Great one that you can pop your hand in....

I think they are both swap worthy! I like the pocket on the back making it even more useful.