Many years ago, maybe 12-15 years ago, Ally and I bought the Allie dog pattern from Bunny Hill Designs and made bunches of puppies for all of her friends. I had tucked it away and recently pulled it out to make more puppies from my hand woven scrap fabrics. 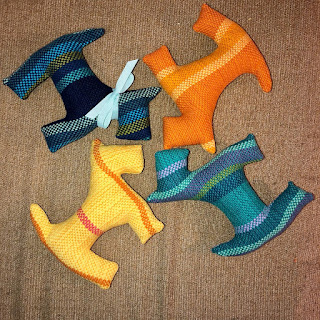 Whenever I weave a batch of towels I save the small bits of woven fabric that are left at the end of the run. I knew these scraps would come in handy one day! The puppies are backed in quilting cotton from my stash and stuffed with fiber fill. 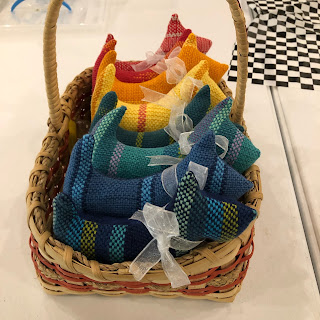 These will be donated to our church bazaar for the kids shop. I think the kids will love the bright colors!
Posted by Ellyn at 7:00 AM 2 comments:

This week in our In Tandem Art discussion Sarah and I discussed books that have given us creative inspiration. Here is a fairly comprehensive list of the books we talked about. Links to sellers are for your convenience only, I don't receive a thing from any of the sellers....

General creativity:
Find Your Artistic Voice by Lisa Congdon
(a personal favorite of mine and a topic I'll be deep diving into in the coming months)
The Little Spark by Carrie Bloomston

Head Heart and Hands by Deborah Boschert, a workbook for developing your creative voice

An Artist's Journey through Wonderland by Katie Fowler (recommended by Sarah. I'm anxious to get my hands on this one)

Anything by Austin Kleon (Steal Like an Artist, Keep Going, Show your Work)

Noteworthy by Crimson Tate, my go to improv alphabet guide

Create your own Freeform Quilts by Rayna Gillan

Walk and Walk 2 by Jacquie Gering

I hope you find something inspirational in this list. I know I have! What other books do you turn to for inspiration in your creativity?

Several months ago, The Solid Seven, a modern solids improv bee I was a part of wrapped up. While it was great to step back and take a break for a bit, I was missing the community that comes from participating in a bee and the inspiration and challenges beemates always provide. When I talked to Sarah about it, turns out she was feeling the same way. We decided to invite other improv quilters whose work we knew and admired to join us in a new adventure.

We invited 10 quilters (including ourselves) to play along and.... what do you know.... all said yes! We all seem to be craving community right now, don't we? Several members threw out ideas for a name. A vote was taken and, by an overwhelming majority, we chose to become Quilts Unscripted.

First up with a prompt for June is Sarah Ruiz. Sarah is creating an Improv Ransom Note Alphabet quilt. She asked each of us to sign up for some letters to make (to avoid duplication), gave us a bright, happy color palette and set us free. Well, if you've been around here long you know how much I love letters/words on quilts. Also, isn't it hilarious that our very first Quilts Unscripted prompt is literally SCRIPT??? I thought so.

I tend to jump on my prompts pretty quickly so my blocks have already arrived at Sarah's house. The letters I  chose were H, Q and Z. I started with the Z and at first nobody could tell what it was supposed to be. Once I added borders it became clearer... 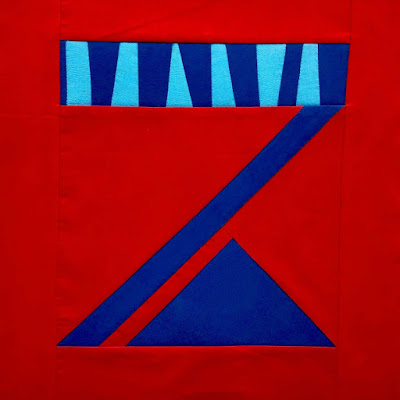 H was up next. Hubby said it looks like the History channel logo? Maybe a little but I assure you I did not use that as any kind of inspiration..,, 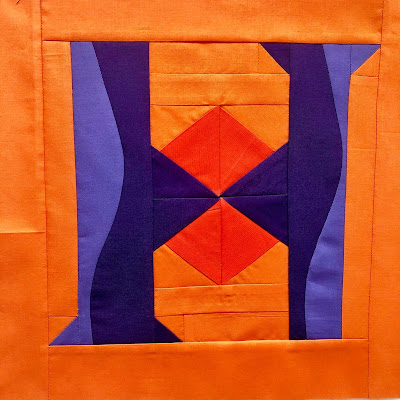 By the time I got to Q I was running out of brilliant ideas. Even though I improv pieced this Q it ended up looking pretty much like a copied font. oh well.... 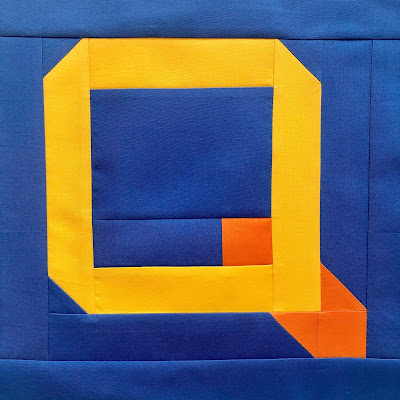 These were great fun to make and I'm sure Sarah's quilt will be fantastic. 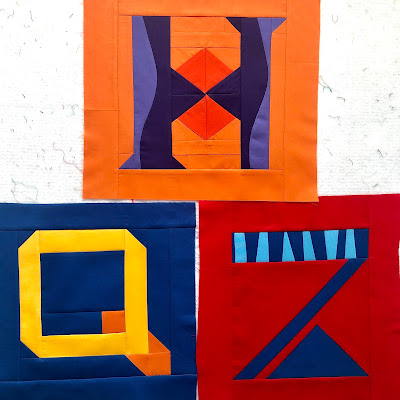 I wonder what July will bring?
If you want to follow along with our group, you can find us at #quiltsunscripted or #quiltsunsdriptedbee.

As previously promised, here are some insights on tracking your Works in Progress, courtesy of me and my pARTner, Sarah. This is from our In Tandem Art conversation last week (which ended up being a phone call since thunder boomers kept knocking out my power and my wifi that day. ugh).

Sarah and I have come to realize over the last few months that when it comes to works in progress, we have very different situations! Sarah tends to have dozens of projects at a  time at various stages of completion, while I am more of the "see it through to the finish" kind  of gal. I typically only have a small handful of projects in the works. Nonetheless, most of the solutions we came up with for tracking these projects work for both of us, and would work for anyone anywhere on the WIP spectrum (is that even a thing? it is now).

Some methods that we currently use, or have used in the past include:

A chalkboard on the sewing room wall (I confess this is mine. I need that list IN MY FACE at all times!) Please note that in my world at lease, the chalkboard must be whimsical and cute. I guess a white board would be equally effective. 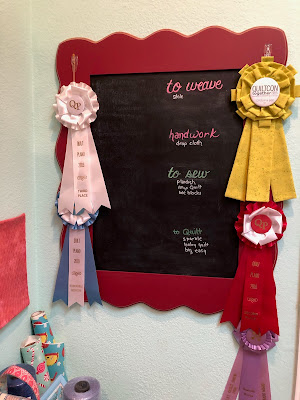 Both Sarah and I have participated in the bloggers Finish Along in the past. You can check out some of my finish along posts here and here. Basically, at the start of each quarter you list the things you want to finish and then at the end of the quarter you report in as to how you did, keeping you accountable and earning you the opportunity to win prizes. My understanding is that this has since moved from blogs to Instagram.
Another way to use Instagram is to set a daily goal for yourself and document it with a hashtag as you go along. Sarah is currently doing #99DaysOfWIPs where she is working on completing projects that she started in quilt classes.
Something I have never tried but I know is popular with many quilters is tracking in a Quilter's Planner.
American Patchwork and Quilting does a 12 month challenge every year to encourage finishes. I know my local quilt store does something very similar.
Sarah educated me on the Trello App, basically a digital bulletin board. I imagine and old fashioned cork board and 3x5 cards would work too (although it would be much more difficult to carry around in your pocket!)

Do you have other ways to track your WIPs? Please share them in the comments so we can all learn more.

Several months ago,  I was listening to an episode of Danielle Krysa's podcast, Art for your Ear (do you listen? I find it very inspiring.) and she talked about an idea she and a friend had called In Tandem Art. I encourage you to read her blog post here to better understand what it is all about. Basically, to participate, you find yourself a pARTner to come along side you, encouraging you and you doing the same for them. The idea intrigued me so much that I couldn't get it out of my head!

That night I was texting with Sarah Goer, a newish quilty friend, and told her all about it. I asked if she wanted to give it a try and she was all in! We decided to meet via zoom every other week (Sarah lives in Northern California and I am in Texas. While it would be great fun to meet twice a month in person, it simply wasn't practical) and held our first meeting the end of February. Since then we have met faithfully every two weeks (allowing flexibility when we had a conflict) and we've enjoyed it very much.

A little more about Sarah, she is a modern quilter, quilt teacher and lecturer, a wife and mom to two great kids who occasionally pop their heads into our zoom meetings. She and I have participated in a bee together for a while and recently organized a new modern improv bee.... more on that another day.

We decided to set a general topic for each meeting, and have found that doing that helps us focus and to each gain something from our time together. Some of the things we've talked about include Creative Goals, Creative Block, our Childhood Creativity and what inspires our work. This last week we talked about how we track our works in progress. It occurred to me that some of the things we talk about might benefit others, so, with Sarah's permission, I am going to begin sharing some of that here. I promised her I wouldn't share anything personal or juicy, sorry folks! Some things are just not intended for internet publication!

In my next blog post I will share some of the thoughts and ideas we had for tracking our projects. Meanwhile, I encourage you to go read Danielle's post and think about who your pARTner might be!

I'm delinquent in sharing this year's 100 day project with you. You might remember my 100 days of Bojagi that I did in 2020. It was great fun and I became better at a new skill, which, for me, was the point. This year I decided to go in a totally different direction. No needle or thread this time.... I decided to doodle 100 days of Monsters! Why monsters, you ask? Why not?!?

The project wrapped up several weeks ago. Here are all of the monsters I drew in the 100 days...

First because the project began in February, my birthday month, I drew monsters at a birthday party... 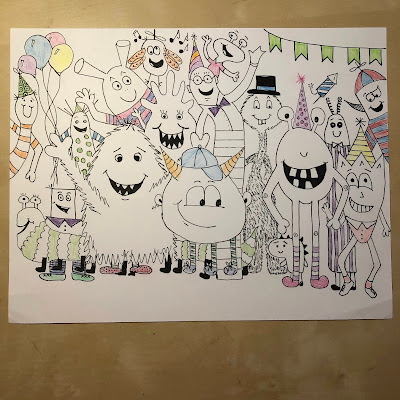 Next up was a monster picnic. 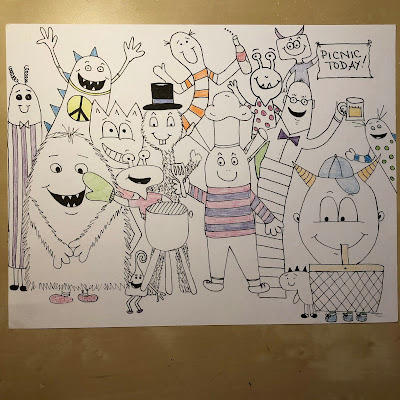 Monsters at the grocery store.... 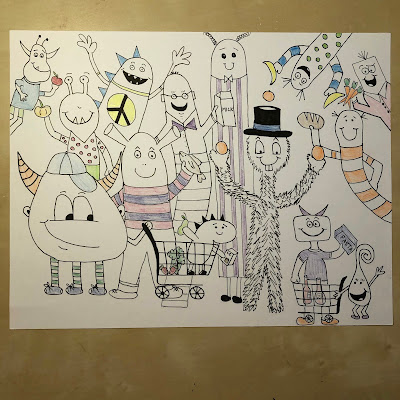 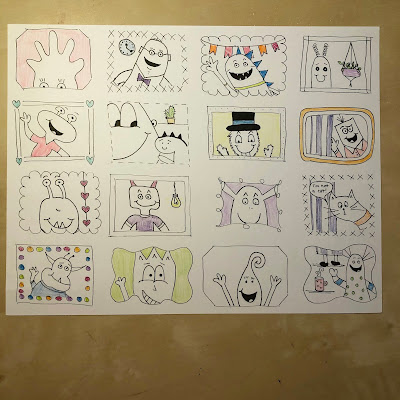 By now baseball season had started, so the monsters headed to the ballpark. 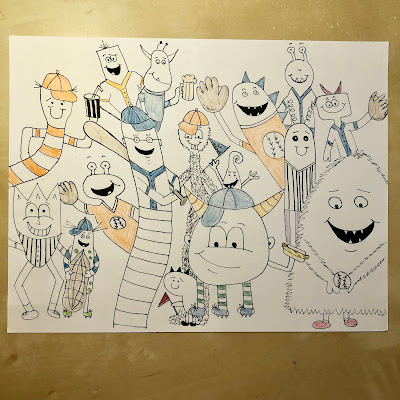 Of course, the yard work needed to be done... 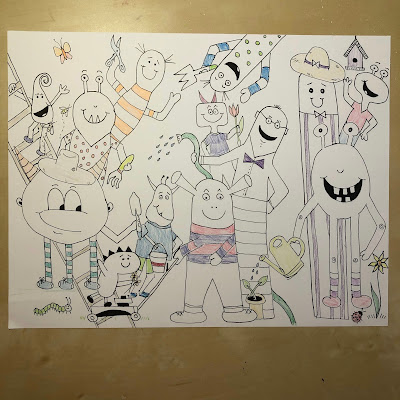 and finally, they headed off to the bakery for a treat... 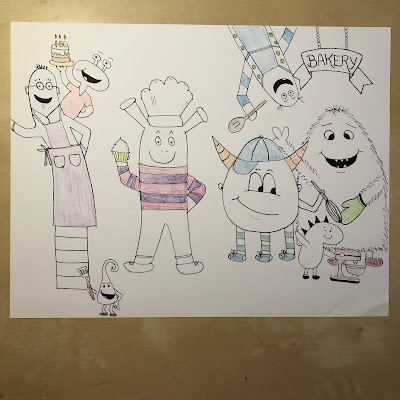 I had so much fun drawing monsters! Have you ever done a 100 day project?

My guild, the McKinney Modern Quilt Guild started a fun tradition a year or so ago. We have a big jar full of scraps. Every meeting, one attendees name is drawn and that person gets to take the jar the next month. They make a fun small item from some of the scraps, refill it to the top and then pass both the jar and the item on to the next person drawn the following month. It's been fun to see the cute little items everyone has made.

Finally, in May, my name was chosen! I won a darling tiny flying geese magnet made by Stephanie. When I picked up the jar from her, I went home and immediately dumped it upside down on my floor. I had so much fun digging through the scraps and finding colors that spoke to me. 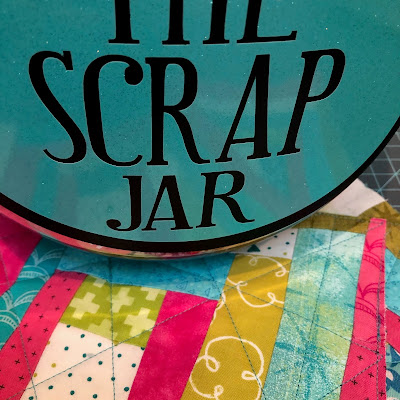 I'll bet you're wondering what I made. Potholders! I added some insulbright that I had on hand and pieced a couple of improv log cabins with the scraps. 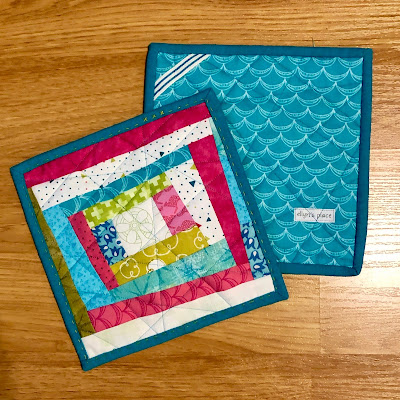 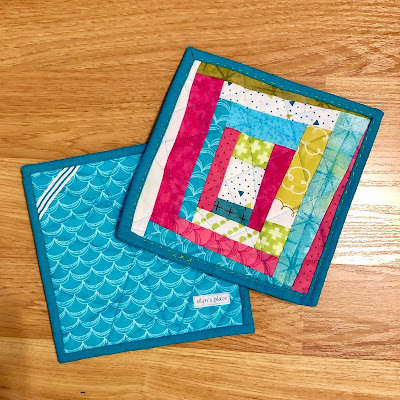 The other day I dropped them off with my friend Chris who is going to make something fun for June. Scrappy is her jam so I'm sure whatever she makes will be lots of fun.