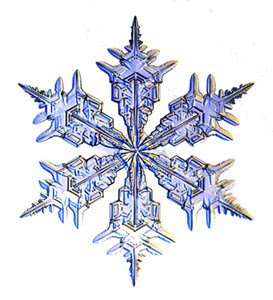 well we're all iced in here in the suburbs of Dallas, TX! Since everyone is home here & safe, I don't mind the "wintery mix" too much. Hoping for a jammie day tomorrow.... of course I'll have to get up at 6 in the morning to check & find out if schools are open or closed. sigh....

I think if we are iced in tomorrow I will start a new project.... enough shopping, time to sew it up! I just have to decide what to tackle... I'll let you know! Happy Winter everyone!

Today I was working on a stitchery project & miss Allyson came in and announced she was ready to learn! AHA! When she's ready, you drop everything & do it, because in an instant her little preteen mind can do a total 180. So I pulled out the idea books & she settled on a dog, which she promptly traced on a piece of muslin. Of course, first she had to explore all of my marking pens. The purple one that disappears on its own held a special fascination. "How long would it take to disappear?" Gosh, I never timed it before! So we did.... and it was only a matter of minutes (watching purple ink disappear is somewhat akin to watching paint dry. I don't recommend it for entertainment).

We decided perhaps some lines and circles to practice her stitches would be a good prelude to attempting the dog. Soon, the lined & circled muslin was hooped & ready... the needle was threaded with pink embroidery floss & Mom had knotted the thread (the threading she did herself, but somehow those darned little knots are a problem!). We worked hard on learning the stem stitch & by dinner she had completed a line, a circle, and her name! Very nice. Perhaps tomorrow she will stitch the dog..... or not. One never knows with Ally! Every day is a surprise.

And so, she can now add embroidery to her ever growing resume of skills.
Posted by Ellyn at 9:13 PM No comments:

so, on Tuesday I had lunch with my friend, Joellen, (justsaysew) & she gave me a pattern for a bag & 2 packs of Mary Engelbreit charm squares to make it with! WOW! What a great Christmas gift! I love to make bags & I love Mary Engelbreit, so the combination was fantastic! I rushed right home & set to work... & TADA! 2 days later I have a terrific bag! For the record, I have not accomplished much else the last 2 days! My house is a mess & my kids had Wendy's Burgers for dinner last night... too bad! Thank you Joellen! I love it! 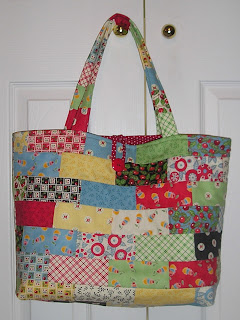 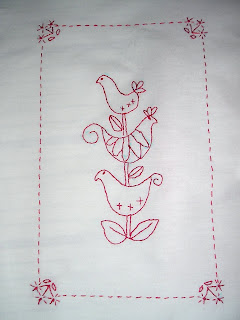 I haven't embroidered in so long! & now that I've started again, I can't stop. There's just something soothing about the feeling of fabric between your fingers, the rythmn of the stitches, in and out... it's taking me back to my childhood!

I remember my first semester of college at a small Christian school in PA (ok, it was my ONLY semester there, if you must know!) I was sooooo bored. Classes were ok, my music was wonderful, but seriously, I'm a city girl! So I wandered into "town" one day & at the 5 & Dime I found some little embroidery kits in the sale bin & took them all back to my dorm room... guess what everyone got for Christmas that year? I wouldn't be surprised if Mom still has hers!

Thanks, Mom, for passing all your craftyness (is that a word?) down to me! 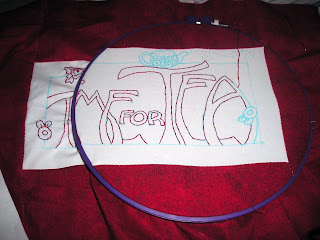 my good intentions for a healthy, doctor free 2009 have already gone out the window! It started with a cry for help from the garage & ended with 6 stitches in my sweet husbands thumb. He told the PA he was trying to amputate it & she told him he was not very good at amputation! Poor thing... but really it's amazing, he's gone 45 years without a single stitch! I felt so bad for him....

Tomorrow, Marley & Me! Looks like a sweet movie. Then maybe I'll get back in my sewing room & start some wonderful new project. I'm itching to embroider something.....
Posted by Ellyn at 10:03 PM